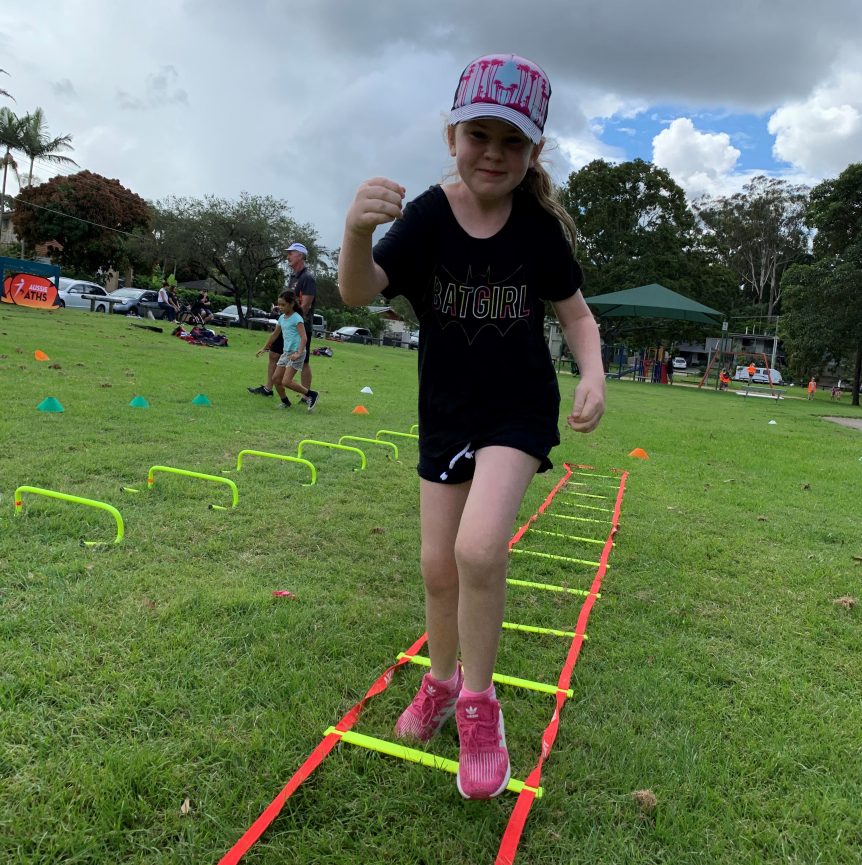 “It makes me feel happy when I’m running,” says Jesse-Rose, “I really like it.”

The grade six student at Coomera Rivers State School loves being like any normal 10-year-old when she runs around the park in the new Aussie Aths kids program.

Jesse-Rose has an extremely rare medical condition Mucolipidosis III, a condition that stores enzymes and cellular waste in all the muscles, tissues, bones and organs in the body which causes stiffness and pain in the joints.  It is so rare there are thought to be less than 10 children in Australia and less than 100 worldwide with the condition. Brother Damian also has the condition and is largely confined to a wheelchair.

Mum Juanita says the disease, which has no known cure, is debilitating and for Jesse-Rose to join in with the other kids in the Aussie Aths program run by her Aunt Sharon has provided a huge boost to her wellbeing and also her outlook on life.

“She’s really excited to get up and go, she loves it…  She just feels normal when she’s doing Aussie Aths, just like all the other kids,” Juanita says.

“And the fact that she’s just involved with the group, as just another kid, is fantastic. It’s not competitive so she finds that she’s not running races against other kids… and can to it at her own pace and level.”

One of the other side effects is fatigue, although the Van Dam’s have found that exercise is helpful in managing the daily impact of the disease.

“She was doing dancing, but the jumping wasn’t good for her bones, and Sharon has developed a modified program that doesn’t include any jumping, so she can still participate and does all the running and the other activities, which she just loves.”

“It’s developed her independence which is wonderful.”

Aussie Aths, a new health and fitness program for kids, commenced on the Gold Coast in February and will run in multiple locations across the Coast in term two.

Aussie Aths is designed to teach the ABCs – agility, balance, coordination and speed – for every child in a fun, game-based program. Learning to run, as the foundation of nearly all sports, helps kids be more athletic in every day life, and for whatever sport they love.

And Jesse-Rose’s Aunt Sharon is none other than Sharon Hannan, former long time coach of Olympic gold medalist, Sally Pearson.

Hannan said that the Aussie Aths program is for every child and not just for those interested in competitive athletics.

“As we see with Jesse-Rose, Aussie Aths is about helping Aussie kids to be healthier, fitter and faster in a fun environment. It’s exactly the type of program that parents have been looking for and the feedback we have had since starting in February has been fantastic.”

Aussie Aths has three age group programs – Active for prep to grade 2’s, Accelerate for kids in grades 3-6, and the Aussie Aths Academy for kids in grades 6-8, which ensures the program activities are suited to the age of each child. Aussie Aths is delivered by professional coaches, only goes for an hour and runs at various times and locations on weeknights after school, and on Saturday’s during school terms.

Programs commenced on Monday 29 April and will be conducted at Upper Coomera, Helensvale, Molendinar and Oxenford throughout term two.